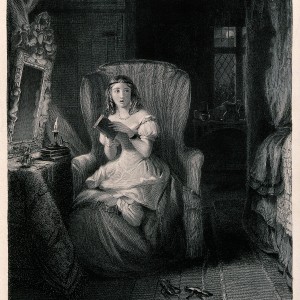 This one wasn’t at the hotel, but it did occur in Santa Fe, and the woman who shared it feels very certain that her experience somehow involved Julia . Susan lives in New York, and when she heard the review of American Ghost on Fresh Air she quickly emailed me with this story. Here’s what she had to say.

I am a very very practical person with no belief whatsoever in ghosts or even religion.  I don’t drink or use any drugs.

However, I was spending the night up a valley, north of Santa Fe in the early 1970s.  I was asleep in a room by myself when a sensation of light awoke me.  I felt a tap on my arm and saw a smiling old woman (appeared that  she was in a light nightgown) looking at me.  When I spoke out to my hosts in the other room, ‘There is someone here to see you’ . . . the ‘light’ went out.  My hosts came out into my room and said that this happens all the time.

I have never had any inexplicable event ever in my life before or since.

I think I saw Julia Staab.

Thanks for your interview on the radio yesterday.  Now I know who that was.

I emailed Susan back, and thanked her for sharing the story. The next morning, she emailed again.

Thanks, and one more thing:  as the host (homeowner) came around the corner after the ‘light’ went out, I told him to watch out since I thought he’d bump into her since she was next to my bed and the door frame.

I’ve also had no such ‘encounter’ since.

I’m excited to see that I did not ‘see things’ that were not ‘there.’ She’s there. In Santa Fe.

Hmmmm. If you’ve had similar experiences I’d love to hear them.