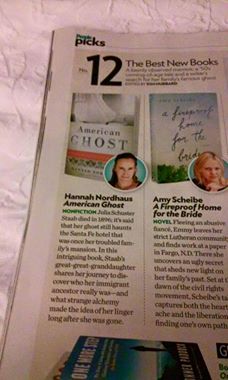 It’s been a big week! American Ghost was a People Magazine “Best Book” of the week: “In this intriguing book,” says People, “[Julia] Staab’s great-great-granddaughter shares her journey to discover who her immigrant ancestor really was—and what strange alchemy made the idea of her linger long after she was gone.”

A few days later, I was bombarded with emails and Facebook messages letting me know that literary critic Maureen Corrigan was reviewing American Ghost on NPR’s Fresh Air: “Whether you believe in ghosts or are just intrigued by their persistence in popular culture,” she said, “American Ghost is itself a haunting story about the long reach of the past.”

And this morning, the Dallas Morning News ran a fun and detailed review, recounting Julia’s ghost stories, and Abraham Staab’s encounter with Billy the Kid while in a stagecoach with Sister Blandina, New Mexico’s most famous nun, and the horrific medical treatments Julia and other 19th-century health-seekers received, and the horrors of Julia’s sister’s death at the Nazi concentration camp of Theresienstadt. ““Nordhaus attacks her subject with the same scholarship and lively writing that made her nonfiction debut, The Beekeeper’s Lament, a beloved best-seller,” reviewer Jane Sumner wrote. “Her second interweaves ghost hunts with memoir, Western lore, history, travelogue and family annals.”

A review also ran in Shelf Awareness last week: “Nordhaus’s chronicle of her unlikely pioneer ancestors is fascinating and frequently surprising. Ultimately, American Ghost is a reflection on how the unresolved questions in our own histories can be even more haunting than ghosts.”

I hope Julia would approve.