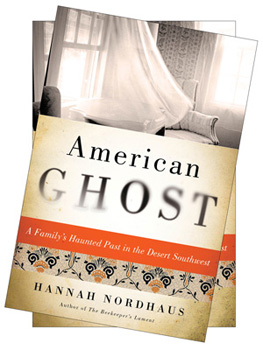 “A haunting story about the long reach of the past." - Maureen Corrigan, NPR's Fresh Air

“In this intriguing book, [Nordhaus] shares her journey to discover who her immigrant ancestor really was — and what strange alchemy made the idea of her linger long after she was gone." - People Magazine

I’ll be spending the next year on a National Geographic Storytelling Fellowship, chronicling a conservation group’s search for “lost species.” My itinerary is still in process, but I hope to travel to Colombia to search for lost parakeets, to Kazakhstan to track a missing sturgeon, and to the Galapagos to visit with a century-old tortoise that had been hiding in plain sight on a remote western island. The project will follow teams from Global Wildlife Conservation, an NGO that is seeking to find species that have not been seen in the wild for many decades, and in so doing call attention to efforts to save them and the crucial habitat that may support them. I plan to write about the hunt for these elusive species, and explore how stories of bold exploration and hope can spur conservation.

After a year and a half of talking, reporting, marching, conference-calling, driving, hiking, biking, horse-riding, writing, editing, agonizing, factchecking, more editing, more agonizing, more factchecking, two features I wrote ran in this month’s National Geographic magazine. The cover story tells the story of the battle over public lands in the American West. A second story tells of how the sage grouse, a struggling species found only in the “sagebrush sea” region (with the most outlandish mating ritual you’ll ever see, besides, well, humans), has exacerbated conflicts over land use and environmental protection in the west.

Around the same time scientists first identified Colony Collapse Disorder, another, less-heralded bee mystery was also unfolding. In 2006, a UC Davis entomologist named Robbin Thorp spotted a lone, yellow-topped Franklin’s bumblebee in a meadow in Oregon’s Siskiyou Mountains. It was the last Franklin’s bumblebee anyone has seen. Along with three closely related species, the bee had suffered a population nosedive, and no one knew exactly why. In the Wall St. Journal this weekend, I reviewed two new books that explore the decline of many of our native bees. There are 20,000 species worldwide, and many of them are struggling. You can read it here: https://www.wsj.com/articles/buzz-and-our-native-bees-review-give-bees-a-chance-1531445361

Endangered beetles are boring. Except this one. Whose story (published this month in Scientific American) includes: a .38, a .45/.410 combo, a bowie knife, a Viking range, slate tile, feral hogs, rotting Walmart fryer chickens, frack rigs, frack tanks, meth buckets, the smell of death, (extinct) passenger pigeons, angry Oklahoma politicians, and “consultants with coolers full of dead things to attract imperiled things that no one knows is there and no one is likely to miss.” There’s a paywall, so you can’t see the pretty beetle photos, but you can read the article here:

Last summer I spent two humid sunsets in a cornfield in Illinois, learning about the corn rootworm–which is not actually a worm, but rather a beetle. It is the most consequential pest in American agriculture. Known as the “billion dollar bug,” its cost to corn growers is estimated at somewhere just shy of 2 billion dollars, including research into GM crops that have kept the pest under control for a decade, but now are starting to fail. It’s an constant evolutionary battle between farmer, beetle and the ag company scientists trying to help farmers fight it off. The beetle has developed resistance to every pesticide farmers have thrown its way–and even to age-old agricultural practices like crop rotation as well. Joe Spencer, an entomologist who has devoted his career to studying the bug and is known to his colleagues at the Illinois Natural History Survey, affectionately, as “Cornboy,” gave me a tour of the world of the rootworm, and I wrote about it in Scientific American’s March 2017 issue. I have never seen more corn in my life.

I write in this month’s Smithsonian Magazine about Sister Blandina Segale, the intrepid nun who founded hospitals and schools in 19th century New Mexico, and is now being considered by the Vatican for sainthood (and who saved my great-great-grandfather from Billy the Kid). I spent some time with the man who is championing her cause, and the detective involved in Sister Blandina’s very belated background check.
http://www.smithsonianmag.com/history/next-american-saint-sister-blandina-regale-immigrants-womens-history-180960782/

American Ghost has won the Creative Nonfiction category of the WILLA Literary Awards. The award will be presented at Women Writing the West’s annual conference in Santa Fe, October 13-16 at the Drury Inn on the Plaza, just across the street from Julia Staab’s home. La Posada will offer tours of the home from 2-3 on Thursday, October 13.

Denver mystery author Mark Stevens interviewed me about American Ghost just before the book’s release, and he reposted the interview after the paperback came out in March. His questions were both thoughtful and thought-provoking: https://markhstevens.wordpress.com/2015/03/10/q-a-25-hannah-nordhaus-american-ghost/

Last week on Writer’s Almanac, Garrison Keillor read one of my mother’s poems from her new book, a poem about birth, and death, and owls, and ancestors (and ghosts). She showed it to me as I was writing American Ghost, and the scene made its way into the book as well. | READ MORE

I am re-reading my mother’s new book of poems, Memos from the Broken World, now that it’s out in the world – it is so thoughtful and poignant and illuminating. This is a poem I particularly (selfishly) love — being the daughter mentioned in the poem, and being mother to a daughter of my own now, watching her, too, “move on to her life.” And because of the ghosts, of course. | READ MORE

American Ghost is co-winner of the Seven Sisters Book Awards in the nonfiction category. The Seven Sisters prize is a brand new awards program honoring women’s stories and women authors.

A few weeks ago, I flew down to Santa Fe for
a party at La Posada. The hosts had rented out the house, and for the final night of the event, the planners moved all of the furniture out of the bedrooms upstairs and the downstairs parlors and bar, and moved dining tables into the rooms so the guests could eat there. Including in Julia’s room. | READ MORE 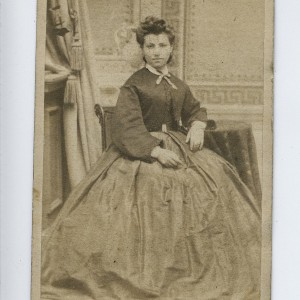 I had always hoped that when the book came out, I’d gather more information about Julia’s life and family — tidbits that were hidden in family keepsake books or photo albums. I also was curious whether people continued to have encounters with the ghost of La Posada. Now I am beginning to hear some of those stories, and I’ve created a new blog on my website to share them as they come in.

You can read those stories here. If you have stories you’d like to share, feel free to send me an email and I’ll do my best to get them posted on the blog. | READ MORE

Here comes Halloween: Buzzfeed gets spooky. I  wish I had this list of ghost books when I started research on American Ghost — read some of them, but missed a number. 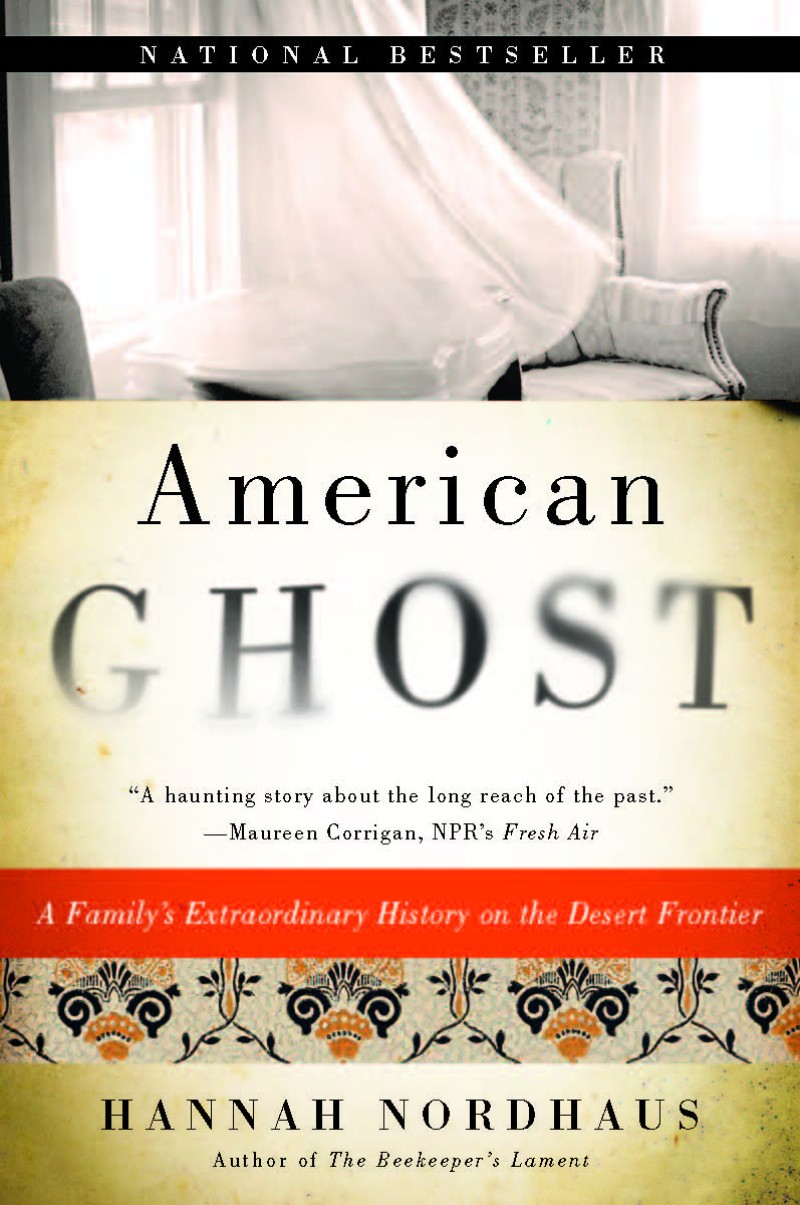 Coming in March to a bookstore near you, the American Ghost paperback!

The idea being to emphasize that this is a history book, not a paranormal potboiler. Fun as those are to read, some people get really pissed when they find out they’ve been duped into reading a history book instead….

onian/Zócalo Public Square asked me to write an essay about Julia Staab for their “What It Means to Be American Project.” I wrote about how Julia Staab became American in the unforgiving desert of New Mexico–whether she wished for that life of not, she had no choice.

“To become American is to accept a staggering loss of self—of the people we once were, in the places we once came from. It may take a generation, perhaps two. But inevitably, it transpires. The surge of conquering culture sweeps down through the generations, much as the spring floods scour the desert arroyos. Washed away, we must lay down new roots.”  | READ MORE

The poet Grace Cavalieri wrote an appreciation of American Ghost in the Washington Independent Review of Books, a wonderful independent book review site based in Washington D.C. “Hannah Nordhaus writes a detective story, although it’s not fiction, and a ghost story, although it’s not a chiller,” she writes. “It’s biography and history and the product of investigative research, yet everything of power, even scholarly process, must come from the heart, and so does this story.” You can read the essay here. | READ MORE

Last week, I sat down with Ryan Warner, host of Colorado Matters, to discuss American Ghost, Julia Staab, the Santa Fe Trail, 19th-century gynecological care, and the fine line between history and lore. You can listen to the interview here.

A few weeks ago, I sat down for coffee with Elizabeth Miller of Boulder Weekly, to talk about American Ghost. The story ran this week – I think she did a fantastic job of getting at the heart of the ideas and sentiments that I hoped to convey by writing the book. You can read the article here.   | READ MORE

A few weeks ago, Jezebel called me to talk about Julia Staab and American Ghost. It was a fun and wide-ranging conversation, which you can read here.  | READ MORE

BookPage asked me recently to share with them what I’ve been reading lately. I can’t say there’s any rhyme or reason to my book selection these days: a little nonfiction, a lot of fiction. A little American West, a little Spanish Inquisition. And a lot of new work by friends like Bill Gifford, James Hannaham, Jonny Waldman and Gretchen Rubin, who all had books come out within a week of my own. But for BookPage, I decided to stick with the theme of the American West and wanderers along frontiers real and imagined. Here’s what I came up with.  | READ MORE

Gretchen Rubin is author of The Happiness Project and the upcoming Better than Before, and is an authority on all things habits and happiness. I spoke with her last month about my own habits: good, bad, and ugly. Now the entire world knows that I crack my knuckles and am a cheap drunk. And also, how much my great-grandmother Julia Staab affected how I try to live my life. | READ MORE

The American Scholar asked me to write an essay recalling one piece of advice that was most helpful to my writing career. I wrote about Mrs. Bluitt, my fifth-grade gifted-and-talented teacher. She died two decades ago, but she towered huge over my development as a writer, and as a person. Here’s what I wrote. | READ MORE

What? You can’t wait until March 10 to see what American Ghost is all about? Lucky for you! My publisher, HarperCollins, has posted the book’s first chapter on Scribd. You can read it here.

This error message is only visible to WordPress admins