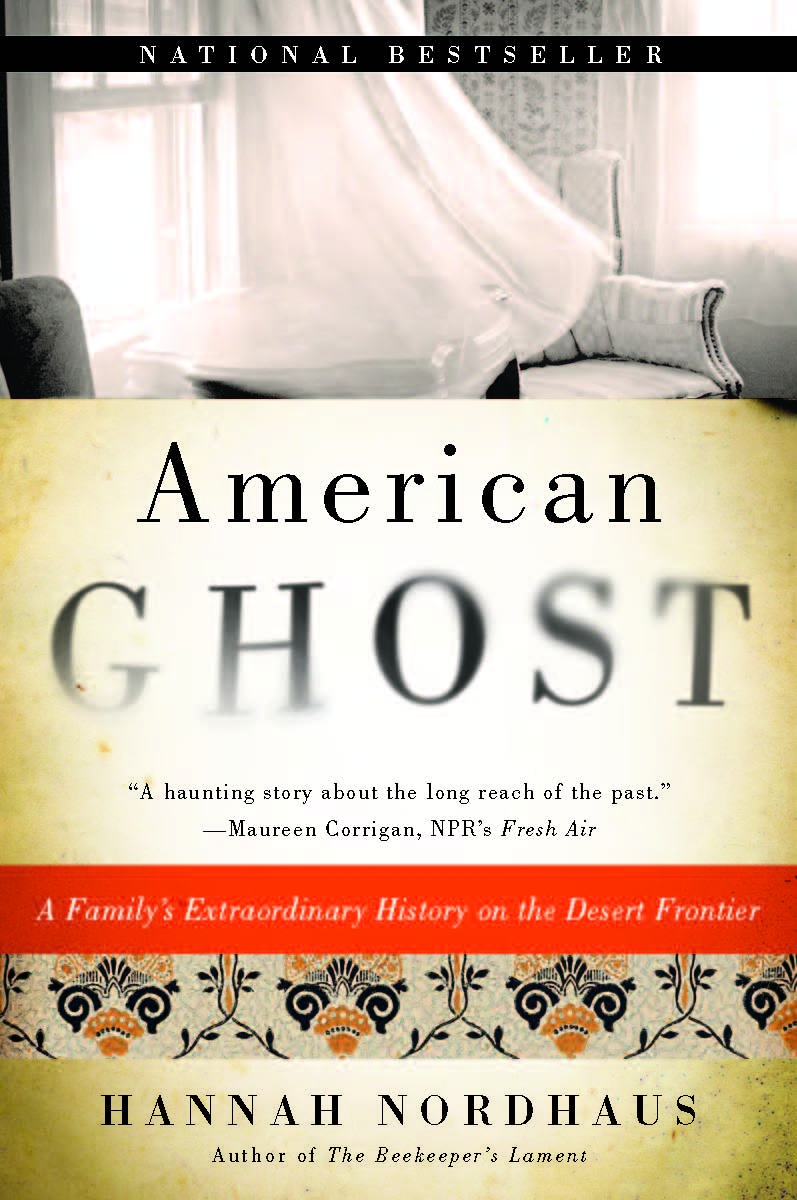 “American Ghost is beautifully written and self-aware, a memoir that tells a story and searches for broader lessons. …. not just the story of a haunting, but a story that will haunt its readers.”
Minneapolis Star Tribune

“Astonishing…. Every aspect of the account is enlightening, well written, and entertaining. [A] touching and uplifting work.”
Library Journal (starred review)

“[A] funny, moving, and suspenseful tale.”
The Week

“Complex and intriguing…. American Ghost is a multi-genre work that succeeds on a number of levels.”
The Denver Post

“[A] graceful and ominous family history…. American Ghost is a purview into a Jewish subculture no less rich, factious or historically relevant than the Pale of Settlement or the Lower East Side.”
Newsweek

“In this captivating book, award-winning journalist Hannah Nordhaus examines the story of her great-great-grandmother Julia, who is said to haunt a hotel in Santa Fe as a dark-eyed ghost in a long black gown.”
Buzzfeed

“Whether you believe in ghosts or are just intrigued by their persistence in popular culture, American Ghost is itself a haunting story about the long reach of the past.”
Maureen Corrigan, NPR’s Fresh Air

“In this intriguing book, [Nordhaus] shares her journey to discover who her immigrant ancestor really was — and what strange alchemy made the idea of her linger long after she was gone.”
People Magazine

“Nordhaus’s chronicle of her unlikely pioneer ancestors is fascinating and frequently surprising. Ultimately, American Ghost is a reflection on how the unresolved questions in our own histories can be even more haunting than ghosts.”
Shelf Awareness

“Incredibly moving…. For anyone who loved reading Time-Life Mysteries of the Unknown books as a kid before setting them aside in favor of the triple fact-checked reporting of The New Yorker, American Ghost is a treat that appeals to both the mystery-craving and truth-loving parts of the brain. Written with heart, sensitivity, and intelligence….”
5280 Magazine

“A fascinating and nuanced account of her ancestral ghost story and her complicated clan.”
BookPage

“A spirited memoir of one of the earliest Jewish pioneer families in the American West…A delightful travelogue…reads like a novel.”
Jewish Book Council

“All of us are haunted — by vestiges of the past, and, as Hannah Nordhaus poignantly observes in American Ghost, by the ghosts of who we thought we were or thought we would become.”
Boulder Weekly

“Nordhaus’s lyrical memoir…untangles truth and legend, the tale of success and the hardships of life, the woman and the ghost.”
Jewish Woman Magazine

“[A] chronicle of German-Jewish immigration to the American Southwest, a reckoning of family secrets, and an account of the author’s personal ghost hunt.”
Santa Fe New Mexican

“A gripping account of frontier life from an immigrant Jewish woman’s perspective. It is the author’s connection of the past where she explores the story, trying to separate the history and the myth.”
Working Mother

“Hannah Nordhaus’s carefully sifted and exquisitely well-told reconstruction of a frontier family… is a different sort of Western, a deeply feminine story with a strong whiff of the paranormal—Willa Cather meets Stephen King.”
Hampton Sides, author of Blood and Thunder and In the Kingdom of Ice

“I don’t believe in ghosts, but I believe in the beautiful literary afterlife Hannah Nordhaus has given her great-great-grandmother. American Ghost is a perfect blend of compassionate empathy, hardheaded journalism, and lucid writing.”
Mary Doria Russell, author of The Sparrow, Doc, and Epitaph

“Tenaciously researched and beautifully written, American Ghost gives flesh to a lost story, exhumes a bygone world, and animates the ways in which the past haunts all of us. Hannah Nordhaus has performed a lyrical feat of dead-raising.”
Benjamin Wallace, author of The Billionaire’s Vinegar

“American Ghost is at once an engrossing portrait of a forgotten female pioneer and a fascinating meditation on the fine line between history and lore. Hannah Nordhaus has crafted a seamless blend of gripping mystery, moving family confessional, and chilling ghost story.”
Karen Abbott, New York Times bestselling author of Liar, Temptress, Soldier, Spy

“Hannah Nordhaus approaches the legend of her great-great-grandmother’s ghost with the insight of an historian and the energy of an inspired detective. A fine tale well told. I loved every word.”
Anne Hillerman, author of Spider Woman’s Daughter

Read the first chapter of American Ghost on Scribd.